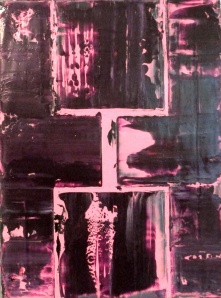 a group of middle-aged men pressed into an archway of a studio complex. Vinyl albums and marker pens held aloft on the off chance of seeing, snapping and obtaining the signature of an old ‘pop idol’ (sic) as they emerge from the studio lair. Candle still held in loyalty if not burnt at both ends these days.

The symmetry of this painting reveals four simple shapes, two of which appear to inter-lock between the regular squares. A degree of contrast is achieved in the way the paint has been applied: in pulling the wet paste across the horizontal axis variations appear, implying different degrees of ‘decay’. Contrast is also promoted in the way the paint is rendered on the square shapes with a vertical movement.

The original visualisation of the album sleeves has been retained in this work and the actual composition hardly changed over the course of the painting’s ‘life’. From the first moment I read the MO I envisaged this painting would be some kind of purple colour. I imagined old basement bars, clubs or venues where bands might perform, and purple seemed to express these dingy subterranean spaces perfectly well.

Humans – like sharks. The need to keep moving (forward) to survive. Work, location, relationships etc…The need for creativity or the propsect of death from inertia/boredom.

The sense of movement in this painting has been created by incorporating chevrons into its design. Interrupting the rhythm of these are two small square panels in the bottom corners, implying obstacles in the way of its flow. There is also a hint of a shark’s gills in the angled lines, but these proved to be entirely accidental. All these lines have been filled-in with a sharp pink paste which, when dragged across the surface, gives an appearance of a warm coloured X-ray.

This ‘X-ray’ seems to look into and emphasise the structure of this movement, and in doing so brings to mind a sense of looking deeper into the painting’s ‘body’, revealing something different to conventional marks and splodges of paint 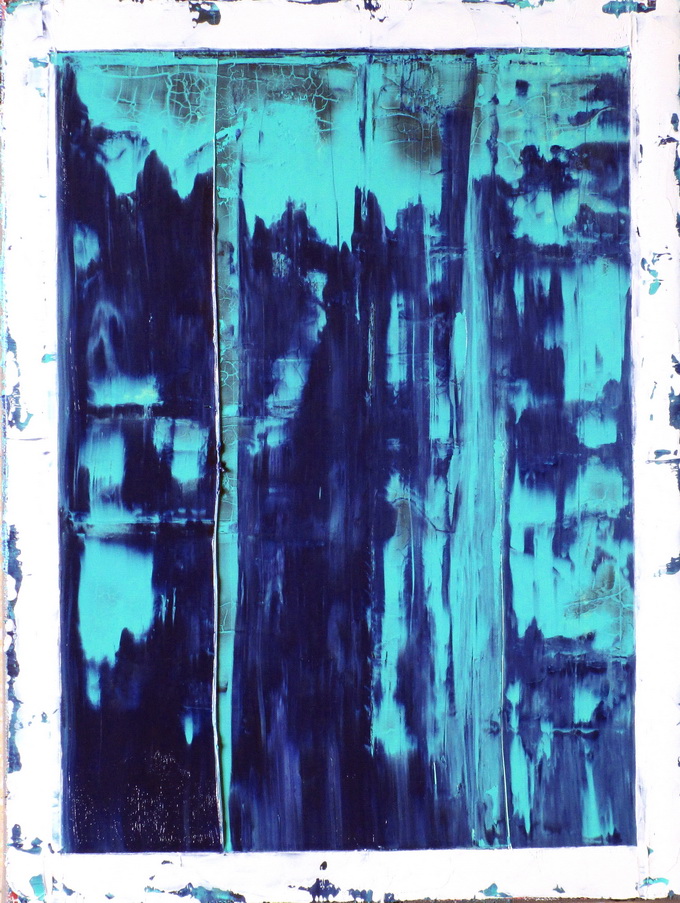 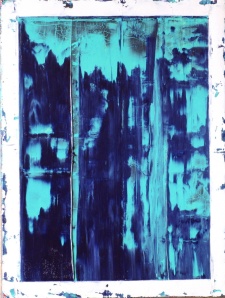 A milk float carrying glass bottles. A heritage (nostalgic) milk round or a last stand against the might of the supermarket or local shop ?

The small scale of the canvas somewhat defeated a plan to use a number of regular shapes arranged about the picture plane, with inter-linking lines (or marks) to suggest some kind of ‘round’, or a journey the eyes might take. On realising this, and in trying to avoid creating something overly contrived, I switched attention to the nature of the colour to be used and enjoy working with the paint. My original response to the MO was to recall the colour of Coop milk floats (from the late 1960s and early 1970s) and use this to determine the dominant colour for the piece.

In rendering the surface, some lines became etched into it, suggesting tyre marks on the road, or at least an ‘imprint’ of something, as well as a sense of a surface becoming worn out and losing a battle against time. The reference to the ‘round’ in the MO was achieved by using a white frame around the edge, usefully pushing the image forwards or backwards according to the way one responds to its frame.