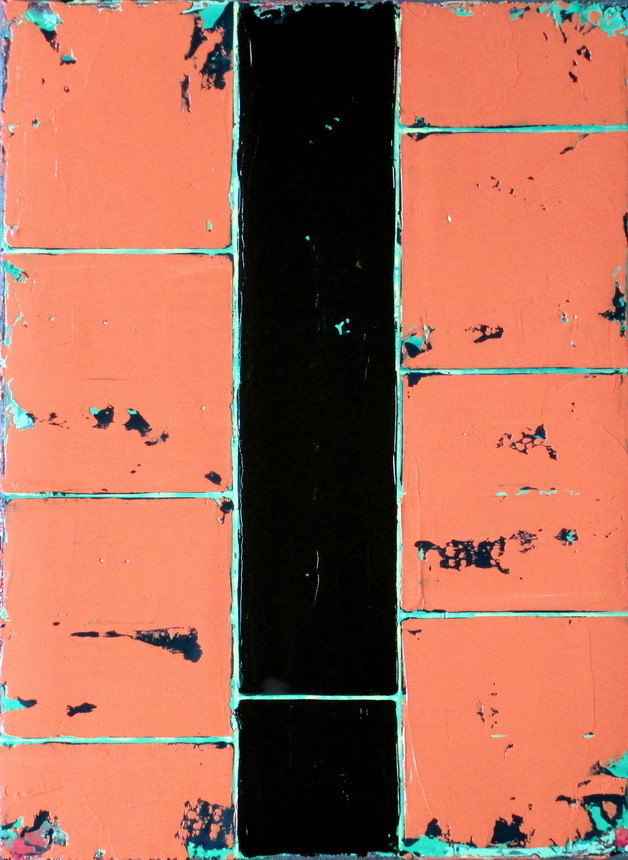 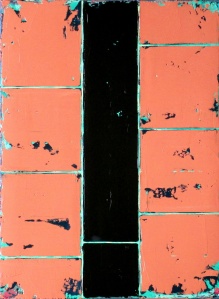 A German couple (born in 1939) talking about their visit and the war in their city as well as their friendship with an ex-RAF crew member from Harlow. The man revealing fading scars from a bombing raid, rolling up his sleeve and (I) thinking he was going to reveal a tattoo from a camp.

Try as I might, the sharp greens contrasted with the darker, moodier versions failed to express what I needed this painting to do. I can’t say exactly why save for some obvious colour theory (and standard practice) that I hoped to subvert and make ‘work’ on a reasonably aesthetic and expressive level. Hints of this radar screen green can still be seen in the horizontal lines either side of the dark brown-black central column. Before this version the greens felt strangely detached, inert and lacked impact. The solution was to block-in the darker ‘column’ with a very warm black first and then work from this. I felt I needed to retain some idea of a pathway to a target, as provoked by the original MO, and this central shape manages to convey this. The ‘target’ is not seen as such – in my imagination it is still some way off the top edge of the screen. But the black helps to symbolise the dark bleakness of the insides of the bomber’s fuselage, or the blackness outside the windows on a night raid. Each of the two side sections still retain the idea of markers being sent out, by signal, from origin to target – but their stepped arrangement works much better now, visualy, I think, and creates a beteer sense of movement.